A Study in Empathy Through Play and Real-World Connections

The children in the 4s/5s had a love for cats that infiltrated many areas of the curriculum (play, reading, writing, math and art) throughout the school year. It began with the reading of The Mother Cat, a Kamishibi story that lead to extensive role playing. 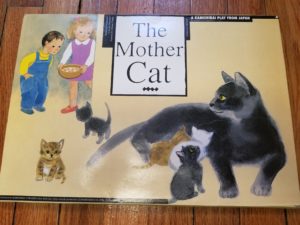 They were captivated by the true story about how a mother cat saved her five kittens from a burning abandoned building in NYC. The story inspired the children to put on a play during work time. 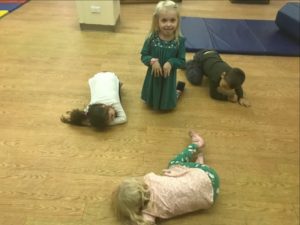 They worked independently of the teachers, deciding which character each child would be, making signs for each character to wear, making costumes, and creating the background scenery with blocks, fire trucks and figures.

Teachers sensed a need for children to have more information. After a trip to Petco to research cat needs and wants, the children began building cat houses with blocks, drawing cat pictures, making cat toys and cat signs. Children explored themes of caretaking through feeding, providing medical care and playing as they embodied the role of the cat and the role of the human. 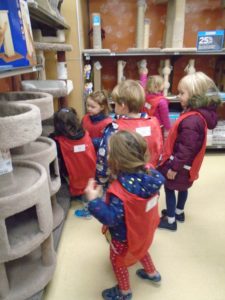 Through reflective conversations, teachers determined that this would be a perfect opportunity to have the 4s/5s extend their understanding further and have a chance to make a real impact on the world. Children at this age are ready to think beyond themselves and step into another’s “shoes.” We decided to introduce the notion of feral cats.

To launch this concept, the children listened to a story called The Cats on My Block about a feral cat family. In the story, a dedicated caregiver feeds the cats every day and builds a shelter for them. The class then discussed the similarities and differences between outdoor (feral) cats and indoor cats through the visual of a Venn Diagram. 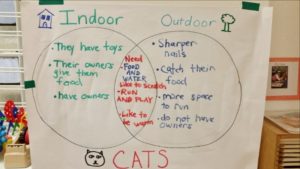 This story also brought to light how feral cats help control the rodent population. This inspired the children to draw mouse holes and mice, which they taped to the wall. They pretended to be cats trying to chase the mice.

After the reading of the story, children thought they might be able to build a real feral cat shelter just like the caretaker in the book! They spent time brainstorming and testing out their ideas with blocks. Then they moved to their own shelter “blueprints.” These blueprints required children to think about what they would need if they were a feral cat. For instance, one child decided to put the shelter on wheels so it could drive away in case of danger.

Another child, drew their shelter on long legs so it would stay off the cold/wet ground. Another included a slide and swings, so the kittens would have things to play on.

Soon after they completed their blueprints, we connected the class with members of Neighborhood Cats (Tamara and Meredith), a grassroots organization dedicated to reducing feral cat populations and improving their quality of life. They spoke to the children about the similarities and differences between feral and domesticated cats, and the importance of feral cats in the NYC community. Tamara gave a slideshow presentation, sharing pictures and videos of the colony of feral cats that she cares for and the domesticated cats that live in her home. 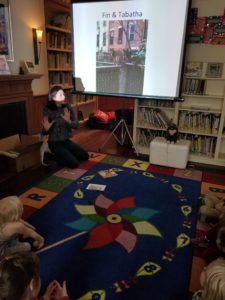 The children also had an opportunity to share pictures and stories about all they had learned. It was an incredible opportunity for the children to participate in a reflective process.

Meredith and Tamara were blown away by the children’s knowledge, articulation, vocabulary, enthusiasm and passion.

At the end of the visit the children asked how they could help Neighborhood Cats and Tamara’s cat colony. They were presented with a Styrofoam box and asked if they could make it into a cat shelter. 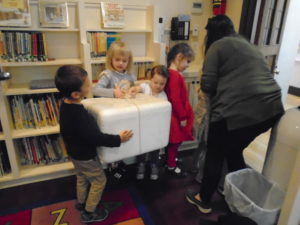 Children were thrilled! Tamara asked them to hand deliver the shelter to her colony once it was ready. They set to work right away using all their knowledge to make an actual shelter! They thought about entrances and exits, colors and bedding. They thought from Tamara’s perspective, what would work best in her garden? As well as from the perspective of the cats, would hay or straw be better?

The big day finally arrived. The children completed the shelter and needed to deliver it! During opening circle, the class created a storyboard, sequencing each step of the trip so they knew what to expect.  “Once upon a time there was a class of children who were going to deliver a cat shelter to Ms. Tamara’s feral cat colony. First, they put on their safety vests. Then they lined up next to their partners…”

The children made their own subway maps for the journey. They used dot stickers to represent each of the 6 subway stops that we would encounter during the ride, and they wrote the street numbers for each stop.  They kept the maps in their pockets and referred to them each time the train pulled into a station, keeping track of the ride. 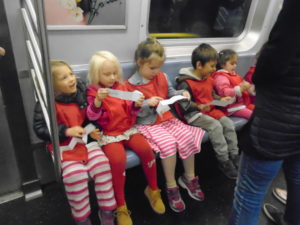 Once they got to the colony, children could observe the feral cats eating.

They noticed how hesitant they were to come out as there happened to be a new feral cat that had recently joined the colony. They learned about the importance of taking feral cats to the vet through TNR (trapping, neutering and releasing). 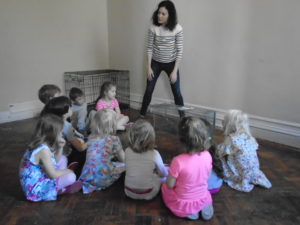 Once the cats had dispersed, they worked together to determine the best placement for their new shelter. It was a thrilling moment, as they saw what a real impact their work was making on these creatures and their caregiver.